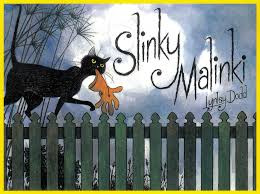 It is no secret that I am in constant awe of Lynley Dodd and the things she can do with rhyme. This book is about a cat who goes out at night, finds treasures and brings them all home. But then his mountain of treasures collapses, waking his family! So he vows to change his ways, and stays inside instead.

Storywise, there’s not much to it, but the tale rollicks along listing the various things he finds in ways that bring to life the community in which he lives (and, oh boy, does it feel Kiwi).

SLinky Malinki is pretty much the only character in this book, so it is inevitably going to fail on all the diversity markers, but it is still a complete delight. C still loves these books, even though he’s, in theory anyway, way to old for them now. 😉 Which just goes to show that really good rhyming and a knack for delightful humour goes a long way.

If you have never read them, I cannot recommend them enough. ❤

This is an excellent example of how a book can fail on all the technicalities and yet still be an utter delight.

The Mousehole Cat is a story about a courageous fisherman and his courageous cat and how they risk everything together to feed their village. I kind of don’t want to say much more about it because if you haven’t read it, the unfolding story is just beautiful.

Mowser is a slightly irrascible cat and she helps her human in that perfectly grudging “I would rather stay by the fire, but you obviously can’t do this without me” kind of way that belies a deep (if grumpy) love for him.

The story manages to show the importance of courage and kindness, of pulling together as a community, without being didactic or moralistic. There is just a smidge of magic, just enough to make you think it might be real.

It’s about a fisherman and his cat in an English fishing village, so it is not surprising that it fails Bechdel and any kind of diversity, but it is still totally worth a read.

Neither the kid nor I had read it before, and we both thoroughly loved it. ❤

More in the Series – Hairy Maclary
“More in the Series” scores the other books in a series where one (or more) of the books have made it into the 1001 Books list. Mostly because I’m a bit of a completionist.

I’ve said before that the genius of Lynley Dodd is how she makes it look easy. Her words and rhyme are so perfectly constructed that you find yourself thinking there is no other way they could go, and therefore this kind of verse must be easy. The text trips lightly across the page, seeming effortless.

As someone who occasionally writes this kind of thing, it is certainly not effortless. Dodd is kind of a genius. 🙂

This book doesn’t really pass any of our metrics – the characters are all dogs and cats so you can’t really talk about diversity. Some of the cats are female, but there’s no dialogue. It’s just a simple romp of Hairy Maclary chasing all the cats in the neighbourhood until he comes up against one who is scarier than he is.

It’s charming as hell, you guys, and if you still haven’t read a Hairy Maclary book (probably because you don’t live in New Zealand), they are definitely very worth getting your mitts on and reading with your kids. They’re somehow very Kiwi and still completely universal, which is quite a thing to pull off.

This is children’s lit at its best. 🙂 C loves them, they’re fun to read, and I marvel at the brilliantly constructed rhyme schemes. Good stuff.

More in the Series – The Church Mice
“More in the Series” scores the other books in a series where one (or more) of the books have made it into the 1001 Books list. Mostly because I’m a bit of a completionist.

I really liked the first book in this series, and, while this one does have some of the same charm, I think it falls slightly short of its predecessor. Still, it was fun to read.

There are no named female characters, so no way for it to pass the Bechdel. There are a couple of black kids in the illustration at the zoo, so I’ve given it a point for that (just because, as I’ve said before, showing any kind of diversity puts it ahead of the pack, alas). But for the most part this book is all Anglo-Saxon male, pretty much. The main characters are all animals, true, but they’re all very ‘default British male’ characters, nonetheless.

Still, it has its charms. Sampson, the cat, and his friends Arthur and Humphrey, the mice, decide to become actors to try and make enough money to fix the leaky vestry roof so that they don’t get rained on any more. They end up on a rollicking adventure to a South Seas island, get left behind, have to fool some scientists into thinking they are rare animals to get back to England, and then have to escape from the zoo to get home. It’s quite entertaining, and has all the humour (some of it definitely aimed at the adult reader) of the original.

I didn’t find it quite as perfectly executed as the first book, but it is still a charming, neat little story.

This book is frikkin’ adorable, and I’m not just saying that because of my affection for things made in New Zealand. It doesn’t pass Bechdel, given there is no dialogue at all, and nobody has names, but there is a fair amount of diversity in the listed cats, and two of them appear to be female gendered, one of which is the cat from Greece who joined the police, so I’ve given it that point.

Apart from that though,it’s just a very simple board book, in the story form of the “add one more each time” variety. C loved it, as he caught on pretty early in the game, and could actually read it with me. (Part of this is cos he’s learning to read, which is crazy exciting for both of us, by the way!)

The pictures are cute, the rhymes are neat, and there’s that lovely thing going on with “my cat” where you love your own thing even if it’s simple because it is your own. All these cats doing all sorts of cool things, but my cat likes to hide in boxes. And that makes it special. Cos it’s mine. I’ve noticed a lot of kids’ books have this idea, and I think really at base what that’s about is telling children that they’re loved. As a friend of mine used to say, “Every parent thinks their child is the most special, and every parent is right.” 🙂

It’s a lovely notion (of, of course, not always as accurate as we’d like), and this book does it deftly and charmingly.

I can’t really fault it. It does what it sets out to do with great aplomb. Recommended.