This was a pretty interesting thing to read with the kid, just because of his reaction. We’ll get to that.

There is no Bechdel pass here – there are pretty much no women at all in any of these stories. By the very nature of the book, though, it passes the diversity test.

Here’s where it gets interesting. So, I asked the kid what he thought after we read it, and he said, “I liked it but the stories were strange.”
“Strange how?” I asked.
“They just ended. It was weird.”

This is kid code for “these tales have a different narrative structure to that with which I am familiar”. And this is why you should expose your kids to stories from other cultures!! Much narrative structure is fairly cultural. It’s useful for children to be exposed to other kinds, as it helps them see the scaffolds of narratives which makes them more critical! *folklore nerd squee over*

It won’t surprise anyone who knows me that I enjoyed reading this with the kid. I love folktales from all over the world – they are endlessly fascinating to me. I’m grateful to the translaters of this book for not “westernising” them up too much.

Read your kids stories from other cultures! It will make their brains more agile. 😉 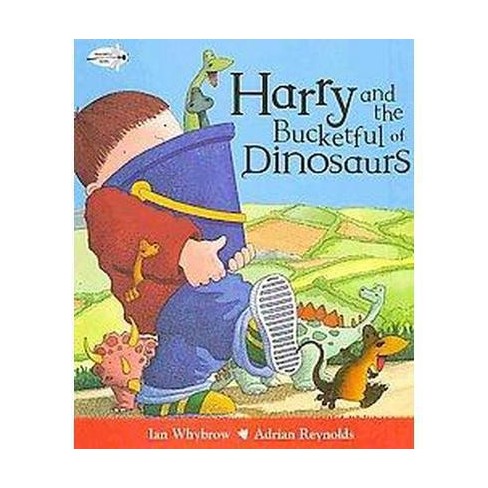 Despite its low score, this book is actually extremely charming.

As with many children’s books, the focus is firmly on the protagonist, so no other conversations happen really, so it can’t pass Bechdel. Harry does have an older sister, Sam, who gets a fair amount of pagetime, but that’s the extent of it. There also isn’t a single person to be seen in the world of Harry who isn’t a white Angle-Saxon type. Soooo no diversity here.

Still, the story is really pretty cute, and it is one of those tales that has gentle nods to the reading adult. Any parent knows what it is like when your kid gets attached to a particular toy. In this case it is a bucketful of dinosaurs instead of the usual cuddly bunny type toy, but Harry is no less attached. The illustrations sometimes show them as simply plastic dinosaurs, but more frequently show them as living, curious, real dinosaurs – they are sure real for Harry! It kind of captures how real these things can be for kids.

C thought it was very cute and gave it full marks! I guess he recognises something in (very imaginative) Harry. 😉

Despite the low score, I have no hesitation in saying you should read this one. It’s really pretty great.