More in the Series – Elmer
“More in the Series” scores the other books in a series where one (or more) of the books have made it into the 1001 Books list. Mostly because I’m a bit of a completionist. 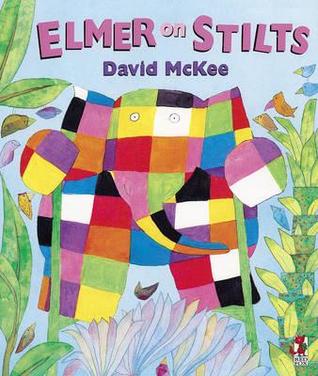 I have a bit of a weakness for elephants, so I am predisposed towards books where elephant hunters get squished. 😉

This is a much better book than the previous Elmer book. Once again Elmer shows his knack for ingenuity, but this time he is using his talents to save the elephants from the elephant hunters. It’s a delight!

No Bechdel pass (not a female character to be seen) and no diversity points. The hunters are all Great White Hunters in the 19th century tradition complete with khaki outfits. Still, they are very clearly portrayed as the “bad guys” so that’s something.

C enjoyed this one. He gave it a 3 out of 5, which is enough to get his point. When I asked why he said it was funny, but unrealistic because apparently elephants can’t possibly walk around on stilts. Which, you know, I guess is true, if a little rich from a kid who constantly invents imaginary robots. 😉

Good stuff though. Rather entertaining, with a nice subtle conservation message. Worth the read.

More in the Series – Elmer
“More in the Series” scores the other books in a series where one (or more) of the books have made it into the 1001 Books list. Mostly because I’m a bit of a completionist.

I much preferred this book to the first Elmer book. It still has no female characters to speak of and the elephants are all still pretty Anglo-Saxon, but there was something about this one that I liked much more than the first.

I think perhaps it is because Elmer, as a character has settled into himself much more. He’s still a trickster, but there is less of a feeling that he’s being entertaining and amusing so that the other elephants like him, and is actually just being true to himself.

The story is set on “Elmer Day”, a day when the elephants all celebrate Elmer and his bright colours, which in itself is kind of nifty. (Maybe if we, as a world, celebrated difference, things would be a bit better around here.) He plays a trick on the elephants, convincing them that his colours have washed off.

I am not a fan of pranking, for the most part, because most pranks require someone to be hurt or embarrassed, but Elmer manages to be a prankster with no ‘victim’. His trick is good-natured, and the idea of the book (yay difference) is a lot more subtle in this one than in the first. It feels more like a story about an elephant (who happens to look different) than a story about An Elephant Who Is Different, if you see what I mean.

It’s a good one. I recommend it.

I’ll admit, I’ve cheated slightly on the points for this one. I’ve given it the variety of characters point even though all the characters are animals. BUT I’m justifying it by saying that the whole point of Elmer is to teach tolerance for someone who doesn’t look like ‘everyone else’.

It’s a tricky one really though, because the whole patchwork elephant thing is fundamentally ‘othering’. Elmer is different because he’s not ‘elephant coloured’, assuming of course that there’s only one way to be correctly coloured if you’re an elephant. But, you know, it’s still good to accept and maybe even celebrate the ‘wrongly’ coloured elephant.

Don’t get me wrong, I think celebration of difference in a children’s book is an admirable thing, but there is something happening here that I think often happens in discourses about difference. It’s the reason I try to avoid the word “diversity” (which is no easy task, believe me) – it fundamentally assumes there is something to be diverse from, there is a norm and an other instead of simply a variety of ‘normals’.

I am probably horribly overthinking this. 🙂 I do that. Elmer is a charming book, with awesome illustrations, and what it is trying to do is ideologically good, I think. But it feels like a first step to me – liberalism 101, where we generously bestow our mark of approval on the ‘difference’ as if it is up to us.

I do not want ‘different’ kids (whatever kind of difference they feel they have) to think that to be accepted they have to be jolly and fun and make everyone laugh like Elmer does. I don’t want them to think their value lies in how well they can make their difference work for the herd in order to be ‘acceptable’. I want them to know their value is intrinsic. Not dependent.

And so, I give it a point for variety and a point for ideology, but I’d like to see more. This is a good first step. Step further.

It’s a great tale though. 🙂 And I love me some elephants. And its fun to read. So there is that. ;P

What do you think? Am I overthinking it? Am I setting the bar too high? Am I being too difficult to satisfy? Do you also think elephants are just supercool?